Where Is The Villages Florida? Everything You Need To Know!

So, you have heard of the mythical place called The Villages Florida.

But where is The Villages in Florida and what is it?

Where Is The Villages Florida?

The Villages is approximately an hour’s drive from Orlando, and an hour and twenty minutes’ drive from both Tampa and Gainesville.

What about the beach? The Villages is conveniently positioned in Central Florida, about 40 miles from the Gulf of Mexico on the west coast and 70 miles from the Atlantic Ocean on the east coast.

What IS The Villages Florida?

The Villages is one of the world’s largest active adult communities, with no end to the growth in sight.

According to recent census data, The Villages was the fastest expanding metropolitan region in the United States during the last decade, increasing by about 40% in the last ten years.

Because the entire region is accessible by golf carts and low-speed cars, The Villages is commonly referred to as a golf cart community.

Villagers can access everything the neighborhood has to offer, including grocery stores and restaurants, via almost 100 miles of golf cart-legal streets and trails. 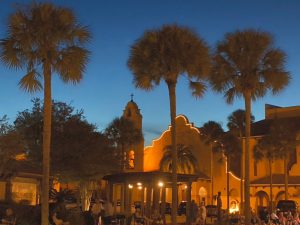 The area is considered an age-restricted community, which has its own set of requirements.

Specifically, at least one person aged 55 or older must reside in 80% of all residences.

No one under the age of 19 is allowed to live in The Villages, however they are allowed to visit for up to 30 days each year.

However,  there are 3 of the 78 neighborhoods that have been recognized as family units, meaning that the minimum age requirement does not apply.

Overall, the majority of the population is made up of individuals aged 55 and over who are drawn to the neighborhood because of its convenience, location, and amenities.

One of the coolest perks of living or visiting The Villages are the town squares.

The three old-fashioned town squares are an integral part of the community’s lifestyle.

Each town square features its own theme, but they all include movie theaters, shops, restaurants, and free nightly live entertainment.

On the northern side of The Villages and the original town square is the southwestern-style Spanish Springs Town Square. 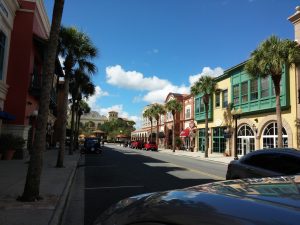 It features The Sharon L. Morse Performing Arts Center and the Rialto Theater.

Residents can dine at 15 restaurants and explore retail shops that include craft stores, salons, spas, and a must-visit winery.

There is also a classic car cruise held in Spanish Springs once a month.

The second square that was built is arguably the most popular. Lake Sumter Landing Market Square provides a waterfront setting for a quaint coastal feel in the center of the community.

The Old Mill Playhouse features the latest movie releases, while over 15 restaurants provide dining opportunities.  Make sure to visit “The Flying Biscuit” for a great breakfast experience!

Some of the shops available here include Winn-Dixie, Barnes & Noble, Van Heusen, Starbucks, and the one-of-a-kind Purple Pig. 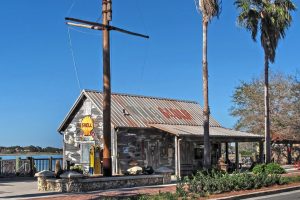 The most recent town square addition is Brownwood Paddock Square,  which is located on the community’s south side.  The square is designed to resemble an old cattle town.

As with the other two, this town square features nightly entertainment that draws visitors from miles around.

It also features the Barnstorm Theater for movies and nightly entertainment.

Brownwood is home to ten restaurants as well as a bank, spice shop, and dog groomer, among many other businesses.  There is also a new 151 room hotel, Brownwood Hotel & Spa

Social Clubs In The Villages Fl

There is an astounding 2,500 + social groups and lifestyle activities that cater to nearly every interest and passion, allowing individuals to keep up with their favorite pleasures while also discovering new ones.

Archery, riding, walking, hiking, rowing, pickleball, and table tennis are some of the active recreation clubs.

Residents also congregate to play a variety of card, dice, and board games.

There is literally something for everyone in The Villages!

One of the pleasures and joys of living in The Villages is being able to get around by golf car.

Villagers enjoy getting together with friends and driving safely by golf car to amenities, recreation, entertainment, restaurants, retail places, and medical facilities.

A golf cart is one of the most popular forms of transportation in The Villages, thanks to a vast network of multimodal trails and walkways. 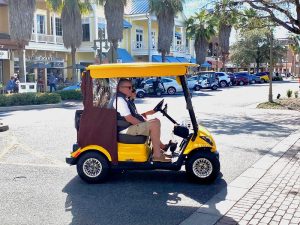 Residents enjoy taking their golf cars to town squares and leisure centers to meet up with friends while enjoying the beautiful Florida weather.

There are over 100 miles of golf car routes and roads, so residents are able to get around the entire width of The Villages.

What is so great about The Villages in Florida?

For the most part, the Villages enjoy excellent, moderate weather year round. It is affordable and there is an astounding amount of sports and activities.

How much money do you need to live in The Villages Florida?

According to Ryan Erisman, author of "The Villages Florida Book," the first question visitors with an interest in the area ask is, "Can I afford it?" The official Village price tag for living there is $1,039 per month.

What is the racial breakdown of The Villages?

Do you have to be 55 to live in The Villages?

Younger people are allowed to live in The Villages. Under Florida law, up to 20% of residents in an age-restricted retirement community can be under the age of 55. The Villages isn't even close to fulfilling that goal: census data shows that 95 percent of its population were above the age of 65 in the last five years.

Florida is a beautiful state in the United States’ southeastern region.

The Gulf of Mexico borders the west coast, while the Atlantic Ocean borders the east. It is unique in that it is the only state that borders both bodies of water.

The population is rapidly growing, but it is currently ranked 22nd out of 50 states, with a population of nearly 22 million people. Tallahassee is the state capital, and Jacksonville is the largest city.

Top Sites In The Villages